After a grueling two-day investiture debate in Spain’s Congress that lasted all of Saturday and into Sunday morning, acting President Pedro Sánchez chalked up an anticipated loss in the first of two rounds of congressional balloting, the second of which he will need to win in order to form a progressive coalition government between his own Socialist party (PSOE) and the further-left Unidas Podemos coalition.

Sánchez garnered 166 votes in favor of his candidacy with 165 votes against and 18 abstentions, with one Unidas Podemos deputy absent due to illness. Falling short of the 176 votes needed for an absolute majority victory in the first round of balloting, the stage is now set for a cliffhanger second vote at midday on Tuesday, in which Sánchez must only win one more “Yes” than “No” votes in Spain’s 350-member Congress of Deputies.

Over the weekend, the Socialist leader’s margin of victory fell to just one vote amid defections by deputies of the small Partido Regionalista de Cantabria (PRC, or Regionalist Party of Cantabria) and Coalición Canaria (CC) parties to the “No” camp in protest over the agreement struck between the PSOE and Catalan separatist Esquerra Republicana (ERC) party to begin negotiations later this month aimed at resolving the political crisis in Catalonia.

Sanchez spent 105 minutes of his introductory intervention in Saturday’s debate outlining the details of the proposed PSOE-Unidas Podemos coalition government program to remake Spain’s society and economy along more environmentally friendly and feminist lines, with greater opportunities for workers and minorities, reversing the austerity cuts and overturning key parts of the labour “reforms” imposed by the government of former President Mariano Rajoy of the conservative Partido Popular (PP) in 2012-2013. At the same time, the PSOE-Unidas Podemos plan projects payment for more social spending and the remake of Spain’s economy by increasing taxes on Spain’s highest earners and corporations.

But the focus of the debate quickly shifted away from Sánchez’s proposed government plan to Catalonia as speakers representing each of the 22 parties represented in the Spanish parliament took their turns at the podium, the debate’s tone deteriorating as Sánchez was targeted with particularly harsh criticism from leaders of Spain’s right-wing parties, led by the PP’s Pablo Casado. 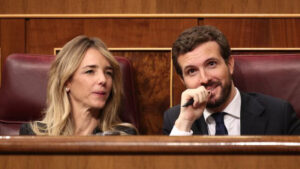 Time and again, the PP’s Casado, along with ultra-right VOX party leader Santiago Abascal and centre-right Ciudadanos interim leader Inés Arrimadas, sharply criticized Sánchez both for agreeing to negotiate with the ERC and for inviting into the government coalition what Casado and the other right-wing speakers repeatedly referred to as the “communists” of Unidas Podemos.

Matters for Sánchez were not helped much when speakers for the ERC and EH Bildu, widely considered to be the political wing of the now defunct Basque separatist group ETA, both made clear that their planned abstentions needed to get Sánchez past the simple majority mark in a second vote on Tuesday come with a price tag, implying they would seek more concessions from the PSOE and the Sánchez government in the future.

The mood in the Congress chamber was particularly inflammatory during the EH Bildu intervention on Sunday morning, with the PP, VOX and Ciudadanos benches repeatedly interrupting the Bildu speaker with cries of “assassins” and accusations of treason shouted out against the Socialist party benches on the opposite side of the chamber.

In the next round of voting on Tuesday, the anticipated 167 votes for Sánchez will be enough for him to win a simple majority against the 165 votes of the right-wing opposition, so long as the 18 abstentions from the ERC and EH Bildu deputies hold and there are no further defections among the smaller parties that have said they will support Sánchez.