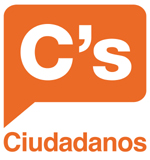 Ciudadanos, or Partido de la Ciudadanía, also known in Catalonia as Ciutadans, is a secular and constitutionalist centre-right party formed in 2006, offering a mix of social democrat and liberal policy positions. It has been a member of the Alliance of Liberals and Democrats for Europe Group (ALDE) in the European Parliament since 2014.

The Ciutadans-Ciudadanos party emerged in 2005 from a civic-cultural organisation launched in Barcelona and known as Ciutadans de Catalunya (Citizens of Catalonia), which was formed by a group of Catalan intellectuals — university professors, writers, actors, journalists, attorneys and economists — who were opposed to Catalan nationalism and saw the need for a platform to represent the ideas of those Catalans opposed to independence from Spain.

In the 10th November 2019 general election, Ciudadanos won 1,637,540 votes, for a 6.9 percent share of the total vote, down from 15.86 percent the party won in the April 2019 elections. The Ciudadanos vote total translated into 10 congressional , representing a loss of 47 seats from the 57 the party held in the previous session of Congress.

In its first electoral outing in November 2006 Catalan regional elections, the party won 89,840 votes and three seats in the Catalan Parlament. Ciudadanos proceeded to present candidates over the next six years in successive municipal, regional and European parliamentary elections, then shed its strictly Catalan identity to rapidly expand nationwide during 2014-15 through the agglomeration of smaller regional and municipal political parties. In May 2015, the party won a surprising 9.68 percent of the vote in regional elections in Andalucia and 1.26 million votes in May 2015 regional elections in 13 autonomous communities.

In Spain’s general election of Dec. 2015, with party President Albert Rivera leading its slate of candidates, Ciudadanos won 3.5 million votes (13.93 percent of total votes cast), making it the fourth-largest party with 40 seats in Spain’s lower house of parliament, the Congress of Deputies. Following the loss of 47 seats in Congress in Spain’s November 2019 general elections, Rivera resigned as party president and announced he was leaving politics.

More about Ciudadanos can be found online at the following links: