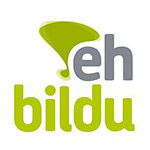 Euskal Herria Bildu (EH Bildu), or ‘Basque Country Unite’, is a leftwing, pro-independence Basque nationalist electoral coalition established in 2012 by parties comprising what is known in the Basque Country as the izquierda abertzale (‘nationalist left’). The coalition currently includes the parties Sortu, Eusko Alkartasuna, Aralar and Alternatiba. It is active in Spain’s northern regions of Basque Country, Navarre and Burgos and also has a presence across Spain’s northern border in the Basque-speaking region of southwestern France.

The current EH Bildu coalition is an amplified version of its predecessor, Bildu (‘Gather‘), formed in 2011 to participate in regional elections in the Basque Country that year after Spain’s Supreme Court barred the Sortu party from electoral participation due to its perceived ties to Herri Batasuna, a political organisation banned in 2003 because of its alleged roles as the political wing of Basque terrorist organisation ETA, or Euskadi Ta Askatasuna (‘Basque Country and Freedom’).

All of the Basque nationalist parties currently belonging to EH Bildu have renounced the use of violence in achieving independence from Spain. The coalition’s controversial initial candidate for Lehendakari in the 2016 regional elections was Arnaldo Otegi, released in March 2016 from prison after serving five years of a 10-year sentence for belonging to ETA but barred from political activity until 2020, who had been elected general secretary of Sortu while still in prison in 2013. Otegi’s candidacy was rejected by Spain’s Constitutional Court in the run-up to the 2016 elections and the coalition chose not to place a substitute candidate on the ballot.

You can find out more about EH Bildu at the following links: