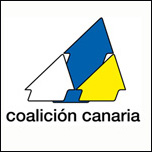 Coalición Canaria (CC) is a regional, centre-right political party in Spain’s Canary Islands formed in 1993 as a coalition of five Canarian parties of distinct ideologies, ranging from nationalist to communist and conservative. In 1993, it unseated the Socialist party (PSOE) as the leading party in the regional parliament and has governed the islands ever since. CC transitioned from coalition status to becoming a full political party in 2005.

In Spain’s most-recent 10th November 2019 general election, the CC ran in coalition with Nueva Canarias and together the coalition won 123,981 votes, for a 0.51 percent share of the total vote, which was down 13,125 votes and 0.02 percent from the last-previous elections in April 2019. The coalition’s vote total again gave them two seats in Spain’s 350-member national Congress of Deputies, which by prior accord was split with one deputy per party.

The CC defines itself as Canarian nationalist but not pro-independence from Spain. It is also pro-European Union and is affiliated in the European Parliament with the centre-right European Democratic Party (EDP) federation of parties that split from the more conservative European People’s Party (EPP) group in 2004.

The hallmark of its relationship with Spain’s governing parties during the past 23 years has been the barter of its vote in Congress for the investiture of the leading party’s candidate in exchange for a guaranteed transfer of sufficient fiscal resources to sustain the government’s regional operating budget.

More about Coalición Canaria can be found online at the following links: