The Socialist party in Spain’ Valencian community is on track to win the most votes in upcoming regional elections on 28th April and may be able to dispense with support from Podemos after the election, leading a majority in the region’s 99-seat regional legislature and governing govern in coalition solely with Compromís.

Thanks to post-election backing in 2015 from both Podemos and Compromis, the regional Partit Socialista del País Valencià (PSPV-PSOE) affiliate of the national Socialist party unseated the conservative Partido Popular (PP) and through a tri-party agreement known as the Pacto del Botanic has governed for the last four years as senior partner in direct coalition with Compromís.

In March, Valencian regional President Ximo Puig of the PSPV took advantage of early national elections called for 28th April to move regional elections forward by a month, breaking with a 40-year tradition of holding the regional balloting on the same day as Valencia municipal and European parliamentary elections.

Seen as an astute move, the switch was designed to win more votes and cement the leadership of Puig’s party in government through the customary higher turnout for national elections and also to gain advantage over coalition partner Compromís, itself an alliance of Valencian Vice-President Monica Oltra‘s Iniciativa del Poble Valencià (IdPV), the green party Els Verds-Esquerra Ecologista del País Valencià and the Bloc Nacionalista Valencià.

Because the Compromís coalition usually performs better at the ballot box in municipal elections than it does at national election time, the Socialists hoped their strategy would make the party less dependent on its partner in government.

That could well be the case after 28th April, if pre-election voter preference surveys turn out to be correct. According to the latest survey conducted by polling organization 40dB for the newspaper El País, the PSPV-PSOE stands to win the most votes in the regional elections for the first time since 1991 and cement its control of the Valencian government, which it lost in 1999 to the conservative Partido Popular and was unable to regain until the three-way Botanic accord returned it to power in 2015. 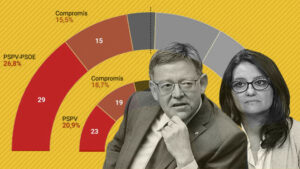 An estimated 21.8 percent of the vote share, up from 20.3 percent four years ago, would give the Socialists 8 additional seats this time out, for a total of 31.

With governing partner Compromis holding steady at about 18.4 percent of the vote for 18-20 seats, the 40dB survey results suggest the Socialists could govern solely in tandem with their junior partner and dispense with the strings-attached support of Podemos, which is expected to see its vote share fall from 11.6 percent to 8.7 percent, losing as many as five seats from the 13 it held in the last legislative session.

Other polls show the Valencian Socialists faring at least as well, if not better. According to the Celeste-Tel poll published Saturday by the newspaper El Diario, 33.1 percent of survey respondents who said they voted for Podemos and 11.7 percent of those who voted Compromís in the last election, now say they’ll be casting their votes for the PSPV-PSOE.

► Click to read more news about the Valencian Community …