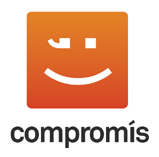 The Coalició Compromís (Commitment Coalition) is an electoral coalition based in Valencia, first formed in 2007 and relaunched in 2010 after various permutations of its member parties in order to compete in the 2011 municipal and regional elections in the Valencian community.

In May 2011 municipal elections, Compromís won 7.23 percent of all votes cast across the Valencian community, netting 345 seats on local town councils and the ability to govern through absolute majorities on seven municipal councils and simple majorities on five others. Two weeks later, the coalition captured 7.37 percent of the vote total in Valencian regional elections to win 5 seats in the Valencian Cortes regional assembly. In November 2011 general elections in Spain, Compromís polled 6.03 percent of the vote in the province of Valencia, winning its first seat in Spain’s lower house of parliament, the Congress of Deputies.

In May 2015, Compromís experienced a surge in its share of the vote in Valencian municipal and regional elections. In municipal balloting, the coalition netted 15.26 percent of the vote total for 722 seats on town councils across the Valencian community; at the regional level, it more than doubled its share of the vote total over 2011 regional results, winning 18.19 percent of the overall vote for 19 seats in the Cortes assembly, placing it third behind the governing Partido Popular (PP, People’s Party) and the lead opposition Partido Socialista del País Valenciano (PSPV, Socialist Party of the Valencian Country), the Valencian section of the national Partido Socialista Obrero Español (PSOE, Spanish Socialist Workers’ Party).

In an historic agreement known as the Acuerdo del Botánico (Botanic Accord), Compromís then combined its votes in the Cortes with those of the PSPV-PSOE and the Valencian section of populist anti-austerity party Podemos to unseat the PP, which had governed the Valencian community uninterrupted for two decades. Under the terms of the Botánico agreement, PSPV-PSOE leader Ximo Puig became the new President of the Valencian Community, with Compromís leader Mònica Oltra of the IdPV becoming Vice-President.

In Spain’s general election of Dec. 2015, Compromís formed an electoral coalition with Podemos to compete in the Valencian community under the name of Compromís-Podemos-És el moment (Compromís-Podemos-Now is the Time). With Joan Baldoví of the Bloc Nacionalista Valencià at the top of the ticket, the coalition won 671,071 votes (2.67 percent of the vote total), giving it 9 Deputies in the national Congress, five of whom chose to form part of the Podemos-En Comú Podem-En Marea parliamentary group and four of whom — including Baldoví — elected to join the Mixed parliamentary group in the Congress of Deputies.

The coalition competed in the second-round 26th June 2016 general elections under the name of Podemos-Compromís-EUPV, with the addition to the earlier 2015 coalition of the Esquerra Unida del País Valencià party (EUPV, United Left of the Valencian Country).

More about Coalició Compromís can be found online at the following links: