The final remains of former Spanish dictator Gen. Francisco Franco were removed today from their controversial resting place at the massive Valley of the Fallen monument by the government of acting President Pedro Sanchez, transferred by helicopter and re-interred alongside Franco’s former widow, Carmen Polo, in a modest crypt at the Mingorrubio-El Pardo cemetery, 20 kilometers north of the capital.

Nearly 44 years after Europe’s last fascist dictator of the 20th century was given a state funeral and laid to rest with full military honours in a recessed crypt before the altar of the Catholic Basilica at the vast Valley of the Fallen mausoleum complex, Franco’s remains were disinterred Thursday morning without ceremony and with television news crews and reporters barred from the immediate scene.

A forensics expert accompanied workers who removed a marble slab and raised the former dictator’s casket from the crypt in the presence of two of Franco’s grandchildren, with acting Justice Minister Dolores Delgado certifying the exhumation as notary for the Spanish government. The original casket in which Franco was buried in 1975 was found to be damaged by humidity upon raising it from the crypt in the Basilica on Thursday, but Franco’s family members reportedly insisted that the original casket be transported for reburial at the Mingorrubio cemetery.

After months of court battles between the government and Franco’s heirs that finally resulted in a Spanish Supreme Court ruling validating the government’s efforts to remove the former dictator’s remains, Thursday’s relatively low-key exhumation of Franco’s remains were in stark contrast to the pomp and ceremony accompanying his burial at the Valley of the Fallen in 1975. 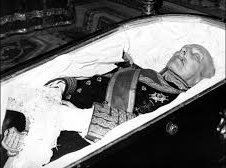 Following Franco’s death in November 1975, Franco’s body lay in state in Spain’s Royal Palace for three days as more than 300,000 supporters formed long lines of several kilometers in order to file by his casket and pay their respects.

A huge crowd lined the route from the palace to the Valley of the Fallen complex in 1975, where Franco was buried in front of the altar of the Basilica next to a crypt in which already lay the remains of José Antonio Primo de Rivera, son of the former military dictator Gen. Miguel Primo de Rivera and founder of the fascist Spanish Falange movement. The burial was attended by only three heads of state, one of whom was Gen. Augusto Pinochet of Chile, who had come to power in the bloody military coup of September 1973 that overthrew democratically elected Chilean President Salvador Allende.

The Valley of the fallen is a vast, 1,365-hectare mausoleum complex conceived by Franco as a monument to the fallen of both sides in the Spanish Civil War, which as leader of the victorious Nationalist side he preferred to refer to as the “Holy Crusade against the tyranny of the godless”. It was built under Franco’s orders by contract workers and the slave labour of vanquished Republican prisoners of war over a period of nearly twenty years at a cost equivalent to 247.5 million euros and was completed in 1959.

The bodies of nearly 34,000 soldiers and partisans are buried in underground vaults at the complex, including some 6,000 Republican soldiers and civilian partisans killed during and immediately after the war, whose bodies were removed from mass graves and reburied at the Valley of the Fallen during the Franco dictatorship.

The entire exhumation and transfer of Franco’s remains from the Valley of the Fallen to Mingorrubio-El Pardo cost Spanish taxpayers 66,031 euros, according to the government. In addition to the two Franco grandchildren witnessing the exhumation itself, 20 other family members were present to accompany the casket to a Guardia Civil Puma helicopter used to transport Franco’s remains to the Mingorrubio-El Pardo cemetery for reburial.

After passage of Spain’s Historical Memory Law in 2007 during the Socialist party (PSOE) government of then-President José Luis Rodríguez Zapatero of Spain’s, Franco’s removal from the Valley of the Fallen was contemplated in a 2011 plan conceived by a panel of experts with the aim of converting the complex into a neutral, non-partisan “Historical Memory” monument that would not glorify the victory in the civil war of the Franco-led Nationalists over forces loyal to the Republican government.

The Zapatero plan was shelved by the subsequent conservative Partido Popular governments of former-President Mariano Rajoy from 2011-2017 and the removal of the former dictator as a first-step in the conversion of the Valley was not resurrected until September 2018, when Spain’s Congress voted 174-2 to approve a resolution calling for removal of Franco’s remains from the Basilica — with abstention by 164 deputies of the conservative Partido Popular (PP) and centre-right Ciudadanos parties.

In February, the government of President Pedro Sánchez announced it would proceed with the removal of Franco’s remains, a decision that was immediately appealed in the courts by Franco’s heirs and supporters. In findings issued in late-September and early-October, Spain’s Supreme Court ruled against the appeals, paving the way for the Sánchez government’s transfer of the former dictator’s remains from the Valley of the Fallen to the Mingorrubio-El Pardo cemetery.