Feminist groups, trade unions and some of Spain’s political parties have joined the call to mobilize with rallies and vigils on Friday 20th September in a “feminist emergency” against a spike in gender-violence that began in July and had seen 17 women killed at the hands of current or former partners across Spain. 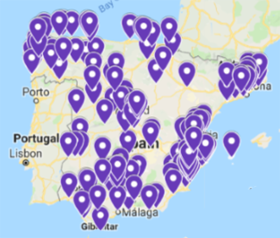 Initially called by the Plataforma Feminista de Alicante (Feminist Platform of Alicante), organizers of the mobilization say vigils and rallies will take place on Friday evening in more than 200 cities throughout Spain.

Participants are being called on to bring electric torches, lanterns with purple shades, candles and mobile phones to “light up the night in purple” to demand that concrete measures be put in place to better combat violence against women and create a society in which women live safe from violent assault.

According to the organizers, there are now confirmed events taking place Friday evening in every single province of Spain and groups in every province have signed onto a ‘Feminist Emergency Manifesto’ calling for a halt to violence against women.

Feminist groups across Spain are particularly incensed that many of the measures contained in the much-touted National Pact Against Gender Violence, agreed in 2017 by all political parties represented in Congress, have never been put into practice because of lack of funding liked to congressional failure to approve a new federal budget.

Not only have deaths of women at the hands of men spiked over the past three months, the mobilization organizers said in a statement, but sexual assaults jumped 50 percent in August, while law enforcement authorities were receiving reports of rape at the rate of one every six hours.

► Read More in Spanish at Público and La Sexta noticias …

► Click to read more news about Gender Violence in Spain …