The government of President Pedro Sánchez has officially confirmed it is working on reforms to the country’s 2007 Law of Historical Memory that would outlaw associations and foundations that serve to glorify the regime of the late-dictator Francisco Franco and would modify Spain’s penal code to make such glorification of the Franco dictatorship a crime.

The government made the confirmation in response to a formal request for information from Senator Carles Mulet of the Valencian regional Compromís party. Mulet is a leading advocate in the Spanish Senate of strengthening and broadening the Historical Memory law, as well as providing justice to families of thousands of victims killed by forces loyal to Franco during the 1936-39 Spanish Civil War and subsequent Franco dictatorship.

According to the letter, the legislative reforms being developed by the government include “modifications so that Associations and Foundations that make apologies for Franquismo will be declared illegal, while at the same time modification of Article 510 of the Penal Code is being studied to define such apologies as a crime”.

In his original request for information, Mulet had specifically referred to the Fundación Nacional Francisco Franco and seven other associations or foundations whose mission is to keep alive the memory and fascist ideology of the Franco regime, which lasted from the defeat of forces loyal to the Republican government of Spain in 1939 until the dictator’s death in 1975.

The Senator noted the Franco foundation is of particular interest, because of suspicion that their failure to present tax filings to the Spanish Treasury for five of the past 10 years may indicate illegal activities. In response, the government said that if activities carried out by the foundation show any indication of illegality, the matter will be referred to the public prosecutor’s office. 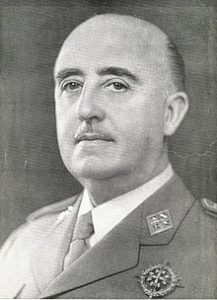 The Franco foundation has been in the forefront of the opposition to the Sánchez government’s stated intention to disinter and move the remains of Franco from the Valley of the Fallen mausoleum outside Madrid, where the dictator was buried in a state funeral in 1975. Last month, the PSOE and other parties carried a vote in Congress to allow the government to remove Franco’s remains from their place of honour at the monument. Both the Franco foundation and the former dictator’s heirs have protested the move, with Franco’s family now saying if his remains are moved they want them re-interred in Madrid’s Almudena Cathedral.

Anticipating the government’s intent to illegalize foundations that glorify the legacy of the dictatorship, the Franco foundation recently made changes to its stated goals in legal documents, downgrading obvious glorification of Franco to a current mission of “disseminating and promoting study and knowledge of the life, thought, legacy and work of Francisco Franco in his human, military and political dimensions”.

As if gearing up to resist the government’s efforts, last week foundation officials put out a public call for financial support to open 35 new branch offices across Spain, with more promised for overseas, in order to defend the memory of Francisco Franco and disseminate the foundation’s version of what it calls the “historical truth” of what went on in Spain during the 35 years of the Franco regime.