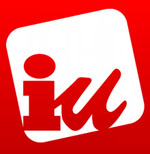 Izquierda Unida is a left-wing political coalition that was formed in 1986 to unite several left-wing political parties and movements, principally the Partido Comunista Español (PCE, “Spanish Communist Party”) and the smaller legacy Spanish Republican party, Izquierda Republicana (IR, “Republican Left”). Internationally, it is affiliated with The Party of the European Left (EL), a pan-European federation of communist and democratic socialist parties within EU and non-EU countries across Europe.

In the three decades of its existence, IU has suffered myriad divisions, breakups, re-unifications, accretion and coalitions with smaller left-wing movements at the regional level throughout Spain, throughout all of which the PCE has remained IU’s core constituent party. IU’s political platform distinguishes it from other left-wing parties in Spain and includes:
► Insistence on replacing the current Constitution of 1978 with a new Spanish Constitution;
► Creation of a Republican government and elimination of the Spanish monarchy;
► Withdrawal of Spain from the NATO military alliance (a platform position put forward by the PCE that Spain withdraw from the EU and the Euro monetary union is currently under consideration);
► Nationalization of strategic industries and infrastructure, including banks, transportation and energy; and,
► Ending Spain’s treaty with the Vatican that provides special status for Catholicism and allows religious education in Spanish schools.

In it’s last solo outing in Spain’s general election of Dec. 2015, the coalition ran a list of candidates with PCE party member and IU parliamentary spokesperson Alberto Garzón at the top of the ticket, winning 923,133 votes for 3.67 percent of total votes cast, giving it just 2 seats in the Congress.

Six months later, Izquierda Unida reached an agreement with Podemos (We Can) to form an electoral coalition for the second-round 26th June 2016 general elections that under the name of Unidos Podemos (United We Can). As of 2019, IU remains an integral part of the coalition formed with Podemos.

More about Izquierda Unida can be found online at the following links: