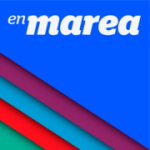 In Spain’s 26th June 2016 general election, competing under the name Podemos-En Marea-Anova-Esquerda Unida the coalition won 344,143 votes for 1.44 percent of the total vote nationwide, giving it 5 seats and making it the ninth largest political force represented in the Congress of Deputies, Spain’s lower house of parliament.

In the general election of Dec. 2015, En Marea won 408,370 votes, or 1.63 percent of total votes cast nationwide and 25 percent of all votes cast in Galicia. As a result, the En Marea coalition accounted for six of the 65 seats comprising the Podemos-En Comú Podem-En Marea parliamentary group in Spain’s lower house of parliament, the Congress of Deputies. Two of those elected Deputies were members of Anova, one from Esquerda Unida, one from Ourense en Comun and two belonging to Podemos. The coalition also saw to Senators elected to Spain’s upper house of parliament, one representing Podemos and the other from Esquerda Unida.

In the 26th June 2016 general election, En Marea competed with Podemos in coalition, appearing on voting ballots under the name Podemos-En Marea-Anova-Esquerda Unida. The coalition partners agreed that decision-making power on the coalition’s executive committee would be equally distributed among the member and that if elected, the government subsidies provided to the parties would likewise be shared out equally.

More about En Marea can be found online at the following links: