More than 50,000 people turned out in Cartagena Wednesday evening to protest the pollution of the 193-square-kilometer Mar Menor saltwater lagoon in Murcia that reached crisis level in September, after floodwaters from gota fría rains inundated the lagoon with nitrate-contaminated agricultural runoff, urban wastewater and mining residues, killing off thousands of fish and inflicting economic damage on the local fishing industry. 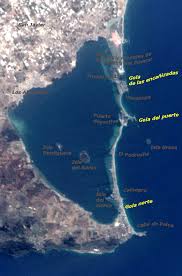 According to a National Police estimate, some 55,000 demonstrators arriving from across the Murcia region attended Wednesday’s march through the downtown streets of Cartagena behind banners that read S.O.S. Mar Menor and Salvemos Mar Menor (Save the Mar Menor).

Called by local citizens’ groups and regional environmental organizations, the protest focused on decades of neglect and lack of enforcement of environmental regulations that were supposed to safeguard the Mar Menor and adjacent communities from unchecked discharge of urban wastewater, agricultural drainage and mining residues that have made their way into the waters of the lagoon.

Wednesday’s march ended at Murcia regional parliament building, where a manifesto pointedly directed at the region’s political parties was read, calling on those who are “not competent to save the Mar Menor, to take a step back and let those who are more committed enact the very urgent measures” needed to save the lagoon and local communities from complete environmental collapse.

Many protesters reportedly turned their ire on the regional government of the conservative Partido Popular (PP), which has governed Murcia since 1995 to the present, a quarter century that environmentalists say has been marked by a steady deterioration of the lagoon ecosystem and local fishing industry.

According to news reports, many of the marchers on Wednesday came from communities that are considered traditional bastions of PP, reflecting voter disenchantment with the governing party’s handling of the environmental and economic disaster that has been steadily accumulating in the Mar Menor.

► Click to read more about the Environment & Sustainability in Spain…