Catalan regional President Quim Torra appeared to bow to growing pressure to condemn violence after a third night of rioting and attacks against police by groups of masked individuals in the streets of Barcelona and other cities across Catalonia.

In a brief statement after midnight on Catalonia’s government-run TV3 television channel, Torra blamed “infiltrators and provocateurs” for the violence by masked protesters that Wednesday night included the burning of more than 50 large garbage and recycling containers in the streets of Barcelona, with flames engulfing parked cars and threatening nearby buildings on one downtown street near the Catalan regional Interior Ministry. 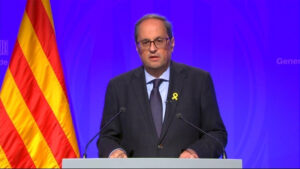 “There can be no rationale or justification for burning cars or any other vandalism”, Torra said, adding that it served to undermine the Catalan independence movement and that it “should stop once and for all”.

At the same time, he skirted direct condemnation of the masked protesters participating in the three nights of street battles that have erupted in response to the call for mass demonstrations in a Tsunami Democràtic (Democratic Tsunami) of protest that Torra had endorsed earlier in the day, as he participated in a peaceful protest march departing the provincial capital of Girona en route to Barcelona.

On Wednesday evening, Spain’s acting President Pedro Sánchez directly called upon Torra to “unequivocally” condemn the violence in Catalonia. Sánchez said his government, which has sent thousands of National Police and Guardia Civil anti-riot police to Catalonia to reinforce the region’s own Mossos d’ Esquadra police force confronting the violent protesters, is considering what further action it might take if the violence does not cease.

Sanchez also said the government’s Interior Ministry is investigating who is behind the cryptic Tsunami Democràtic mobile app that protesters appear to be using to coordinate the violence in Barcelona and other Catalan cities.

► Read More in English at Deutsche Well and France24 …