Ultra-Catholic group Hazte Oír (Make Yourself Heard) is currently on tour again in Spain, this time moving beyond the group’s trans-phobic messaging of the past two years to draw a link between left-wing ideology, feminism and LGBT rights and attacks all three as a threat to Spanish society. 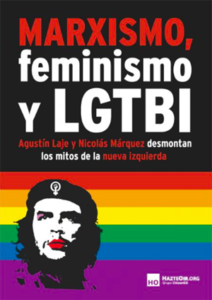 The group’s nine-day ‘Marxism, feminism and LGTBI’ lecture tour kicked off on Tuesday in Madrid and is passing through Zaragoza, Oviedo, Barcelona, Palma de Mallorca, Valencia, Murcia and Sevilla accompanied by its  controversial orange bus bearing anti-transgender messaging, before finishing up in Cádiz on 16th November.

To underpin its message, Hazte Oír has enlisted the help of two Argentine speakers, Agustín Laje and Nicolás Márquez, authors of a book titled El libro negro de la nueva izquierda (‘The Black Book of the New Left’). Laje, says the organization, is “one of the most outspoken voices in the cultural battle against Marxism and other currents of thought that derive from it, like gender ideology”. Márquez is a well-known, right-wing Argentine attorney, essayist and political analyst who has authored a dozen books on topics related to the series of lectures they will give on the Hazte Oír tour.

This latest appearance of the ultra-Catholic group in Spain comes after a series of public incidents and events in various Latin American countries and the United States. In New York, the group’s bus was attacked by transgender activists as it sat parked near United Nations headquarters in downtown Manhattan, while in Chile the bus was attacked by LGBT-rights protesters, seven of whom were arrested by police.

Founded in 2001, Hazte Oír had previously campaigned regularly across Spain against abortion rights, while attacking LGBT-rights and feminist organizations as undermining the Catholic values that the group says sustain Spanish society.

But after a Basque transgender support group launched an awareness campaign in early 2017 with the slogan “There are girls with penises and boys with vulvas”, Hazte Oír struck back with its high-profile bus campaign, using the slogan “Boys have penises. Girls have vulvas. Don’t let them fool you”.

In March 2017, the bus was prohibited by local authorities from circulating in Madrid, Barcelona and other cities on the basis that its messaging violated hate-speech ordinances. In mid-2017, Hazte Oír was granted an injunction by a Spanish court allowing its buses bearing the trans-phobic message to continue to circulate.

► More background in English at The Irish Times and El País…