Health Minister Maria Luisa Carcedo has confirmed that the government of President Pedro Sánchez is preparing to significantly extend the statute of limitations on child sex abuse in Spain, which under current legislation expires within five to 15 years after a victim has reached the age of 18.

In comments to reporters on Tuesday, however, Carcedo did not go so far as to confirm speculation that the Sánchez administration aims to place no time limit whatsoever on the ability of victims to denounce incidences of sexual abuse they suffered as children. 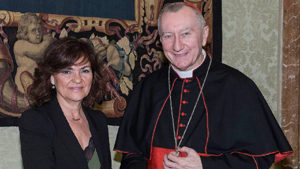 Spanish news media widely reported that Vice-President Carmen Calvo told Vatican Secretary of State Cardinal Pietro Parolin in a meeting in Rome on Monday that the government is working on legislation that would fix no end date on the denunciation and prosecution of the crime of sexual abuse of children.

According to Carcedo, the government’s “intention is to make a regulation that prevents the crime being proscribed after a (victim) has become an adult, with sufficient psychological maturity and with courage and determination to file a complaint.”

Carcedo’s comments seem to support media reports identified as coming from sources in the Justice Ministry, indicating the government is considering several options for extending the statute of limitations on child sex abuse.

Two options include starting the clock on the current 5-15 year statue of limitations once a victim has reached either the age of 30 or age 50, the latter having been recommended to the government by experts and non-governmental organizations working in the area of child sexual abuse. The current 5-15 year statute of limitations is variable, depending upon the seriousness of the offense committed.

The government’s third option is to remove any time limitation on the ability of plaintiffs to file and prosecutors to act on the crime. The only crimes in Spain for which prosecution cannot be proscribed by any statute of limitations are crimes against humanity, genocide, crimes against people and property in armed conflicts, and any crime of terrorism that results in death.

That the issue of child sex abuse was aired by Vice-President Calvo in her meeting with Cardinal Parolin may indicate that a prime target of the government in prosecuting sexual abuse of children is Spain’s Catholic Church, which unlike its counterparts in the United States, Ireland and elsewhere has so far escaped accusations of widespread child sex abuse.

Earlier this month, the Spanish Catholic Bishops Conference announced it was reviewing its internal procedures for dealing with cases of child sex abuse in an indication that the church may be bracing for a spate of denunciations of sexual abuse of children by Spanish clergy.

► Read More in English at and El País and Reuters …

► Click to read more news about Children’s Rights in Spain …