Thousands of protesters spilled onto streets across Spain on Friday to protest the release on bail of convicted defendants in Spain’s high-profile La Manada gang-rape case, pending the results of an appeal of their nine-year sentences to the Spanish courts.

The five men, all from Sevilla and collectively referring to themselves in WhatsApp video broadcasts of their sexual assaults as La Manada (“The Pack’), were convicted in April on charges of “continuous sexual abuse” in the gang-rape of a young woman during Pamplona’s 2016 San Fermín festival.

Each member of the group was sentenced to nine years in prison, less time served under preventive detention since July 2016. The conviction on the lesser charge of continuous sexual abuse rather than the aggravated charge of sexual assault, plus a dissenting opinion from one of the judges in the case that suggested the female victim enjoyed the rape by the five men, led to massive protests across Spain in April. 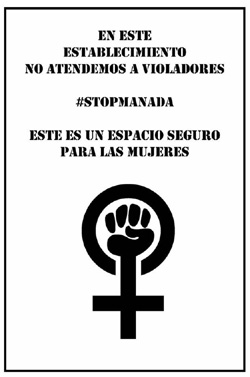 On Friday, the Navarre regional court of justice ruled that the defendants could go free on 6,000 euros bail each until their appeals were decided, saying that because of the notoriety in the case they were unlikely to commit the same crime while out on bail and that none of the defendants appeared to have the financial means to flee the country in order to avoid serving further jail time.

In the defendants’ home town of Sevilla, women’s organizations have launched a boycott campaign on social media under the hashtag #STOPManada, calling on local business owners to register their protest by hanging posters and signs saying, “In this establishment, we do not serve rapists … This is a safe place for women”.

Protesters also initiated a campaign on social media joined by prominent feminists in the world of entertainment, literature and politics, calling on Spanish television stations to not interview the defendants while out on bail and threatening a national boycott of advertisers that support those television stations that do feature interviews with any of the five men.

► Click to read more news about Women’s Rights in Spain …