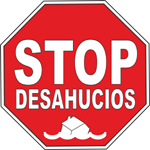 The PAH is structured horizontally as a non-partisan citizens’ movement and adheres to a philosophy of non-violent peacable assembly in the defense of the rights of those facing possible eviction by banks and other mortgage holders.