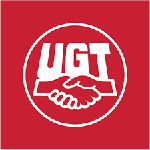 The Unión General de Trabajadores (UGT, or ‘General Union of Workers’) is Spain’s oldest and second-largest union of industrial, professional and service workers, currently with 931,558 members throughout Spain.

The UGT was founded in 1888 by Pablo Iglesias Posse, also the founder nine years earlier in 1879 of Spain’s Socialist party (PSOE), which which the UGT maintains close ties — although no longer the case, for many years membership in the UGT also constituted membership in the PSOE and vice-versa.

Originally conceived as a Marxist socialist labour organisation, the UGT’s ideological underpinnings have drifted during the course of its history from militant socialism to liberalism to democratic socialism. Following a period of tactical cooperation with the anarcho-syndicalist Confederación Nacional del Trabajo (CNT, or ‘National Labour Confederation’) in the first years of the 20th century, the UGT collaborated with the military dictatorship of Miguel Primo de Rivera in the 1920s.

It subsequently underwent a period of radicalization during the Second Spanish Republic in the 1930s under the leadership of trade-unionist Francisco Largo Caballero, who served as Spain’s Prime Minister during the Civil War years of 1936 and 1937. Following the military defeat of Republican forces in the Civil War, the union was banned during the 36-year dictatorship of Gen. Francisco Franco, operating in exile and clandestinely within Spain until after Franco’s death in 1975.

Legalized along with all other trade unions and political parties in the Constitution of 1978, the UGT today claims to represent 32.6 percent of all unionised employees in the country, having negotiated 4,500 collective bargaining agreements on behalf of workers and conducting organizing activities in more than 1.1 million workplaces across Spain.

Learn more about the UGT at the following links online:

► Click to read More about Labour & Unemployment in Spain …