Spain’s Constitutional Court on Tuesday overruled the country’s Tribuna Supremo high court and acquitted the lead singer of Spanish rap-rock group Def Con Dos of glorifying terrorism and humiliating terror victims, criminal charges for which the Supreme Court had convicted the rapper in 2017 and sentenced him to serve a year in prison. 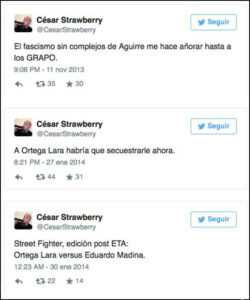 In a 10-1 decision, the panel of judges of the Tribuna Constitucional ruled that rapper César Strawberry’s constitutional right to free speech had been violated by the Supreme Court conviction for a series of six social-media posts published by the rapper via his Twitter account between November 2013 and January 2014.

The original sentence of 12 months in prison also included a ban on Strawberry holding any public office in Spain for a period of six and a half years.

In its acquittal of the rapper, the Constitutional Court’s panel of judges said that while Strawberry’s Tweets might be considered offensive and in poor taste, a “constitutional imperative of respect for freedom of expression categorically prevents us from concluding criminality” occurred in their dissemination.

The judges said they had also weighed the fact that the Tweets were likely to have been interpreted by other social media users who read them at the time has having been intended as political and social criticism, which is protected by the Spanish Constitution.

Strawberry had previously been acquitted of the charges in the Audiencia Nacional criminal court, but the verdict was subsequently appealed to Spain’s Supreme Court.

In 2017, the Supreme Court ruled that Strawberry’s Tweets had “fed hate speech, legitimized terrorism as a formula for the solution of social conflicts and forced victims to remember the painful experience of the threat, kidnapping or murder of a close relative.”

In overruling the Supreme Court, the judges of the Tribuna Constitucional said the high court had erred in their consideration that it was “irrelevant to ponder what was the intention – ironic, provocative or sarcastic – of the appellant when issuing his messages in relation to his professional career as an influential artist and character.”

The panel of Constitutional Court judges said that in acquitting Strawberry, they had also taken into account the rapper’s longstanding “condemnation of violence as a means of conflict resolution.”