The appointment is a clear nod that Sánchez intends to move forward with repeated pledges made over the past 18 months that if re-elected he would seek to transform Spain’s economy into a model of green, sustainable growth for the future of Europe.

In her new VP post Ribera will be charged with coordinating and channeling environmentally responsible policies across the public and private sector of the economy, as well as tying efforts to build a new green economy with a pledge by Sánchez to seriously address Spain’s ongoing problem of chronic depopulation of rural areas.

Presumably, the latter will involve channeling funds for infrastructure and job creation in the new green economy to areas that suffer from lack of employment opportunities and resulting declines in population, so much so that they have come to be known collectively as España Vacia, or “empty Spain”.

The appointment marks the first time since the country returned to democratic rule 40 years ago that Spain has had a cabinet with more three VP positions.

In the previous administration, Sánchez had just one vice-president who served as his principal liaison on all things political, Carmen Calvo. It was always expected that she would remain on board in the new cabinet and her new, expanded post announced this week will be that of Vice President in charge of the Office of the Presidency, Relations with the Legislature and Historical Memory. 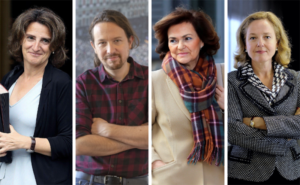 During a televised debate prior to general elections in November, Sánchez had already announced that he would confer a second vice-presidency on his Minister of the Economy, Nadia Calviño.

That move effectively put a padlock on macroeconomic policies and was clearly designed to pre-empt any market fears of a lurch to the left that might be sparked should he be forced into a post-electoral coalition with Unidas Podemos after the election. In the new cabinet, Calviño will be Vice-resident for the Economy and Digital Transformation.

After quickly reaching a post-election coalition accord between his Socialist party and Unidas Podemos, it was widely reported that Unidas Podemos leader Pablo Iglesias would hold another vice-presidency. Last week, Unidas Podemos leaked names of its four ministers in the new cabinet along with the the news that Iglesias’ responsibilities in his vice-presidential post will be to coordinate government policies on social issues and related compliance by Spain with the UN’s Agenda 2030 targets to fight poverty and climate change worldwide. His full title will be Vice-President of Social Rights and Agenda 2030.

The appointment of Ribera to the fourth vice-presidency last week apparently caught some in the Unidas Podemos leadership off-guard, with press reports quoting unnamed party sources as saying the leadership was miffed at what they saw as a surprise announcement, given there had been no mention of the four VP posts in the negotiations toward the coalition government. Some press reports said it was being seen as an effort to diminish the cabinet influence of Iglesias and the four ministers allotted to Unidas Podemos under the coalition accord.

Those reports were quickly dampered, however, by backtracking ackowledgements on the part of Unidas Podemos spokespersons that while they had been guaranteed a vice-presidency and four cabinet ministries in the new government, Sánchez was left free as incoming president to to name as many ministers or vice-presidents as he wished.

On Friday, Iglesias himself put paid to any talk of discord over the issue of four vice-presidencies, tweeting that “It will be an honor and privilege to share rank with three brilliant women from whom I have much to learn”.

► Click to read more news about the Environment & Sustainability in Spain…