In one of the final interventions of the congressional debate Tuesday that saw Socialist party general secretary Pedro Sánchez re-elected to a second term as Spanish President, Unidas Podemos leader Pablo Iglesias stood at the podium in Congress to deliver his address with an unusual badge pinned to his lapel.

Iglesias, who as one of Sánchez’s three Vice-Presidents will be in charge of coordinating social programs and policies for the new progressive coalition government between the PSOE and Unidas Podemos, was wearing a lapel pin of the United Nation’s ‘Agenda 2030’ accord, signed in 2015 by 193 countries that have pledged to implement 17 sustainable development objectives outlined by the UN by the year 2030. 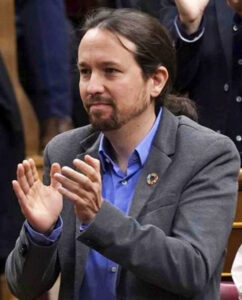 The lapel pin was a sly sign of an agreement already worked out between Sánchez and Iglesias that as part of his government social programs and policies portfolio the Unidas Podemos leader will assume oversight responsibility for efforts across all ministries and agencies to implement Spain’s commitment to meet those sustainable development objectives over the next decade.

Iglesias has already indicated that he will name his former chief of staff, Ione Belarra, as secretary of state in charge of coordinating Spain’s implementation of Agenda 2030 objectives.

The UN’s Agenda 2030 program includes pledges by signatory countries to contribute toward the fight against poverty, the eradication of hunger, a strong emphasis on gender equality and children’s rights and the provision of clean and affordable energy.

It also calls for improvement of conditions for workers amid overall economic growth, the reduction of inequalities and social exclusion within society, a commitment to combat global warming and climate change, as well as working toward resolving armed conflicts, prioritizing social justice and building strong institutions in countries in the developing world.