Thunberg arrived to Madrid on Friday after a 12-hour train journey from Lisbon, where the Catamaran bringing her from New York to Europe docked on Thursday.

The young Swedish activist was not scheduled to attend the COP25 conference until Tuesday, but made a surprise visit to Madrid’s IFEMA convention center to join a sit-in protest on Friday, prior to holding a press conference with a panel of other climate activists and then joining the march through Madrid’s streets on Friday evening.

“We are getting bigger and bigger and our voices are being heard more and more, but of course that does not translate into political action,” Thunberg said during the press event. Adding that climate change and social justice activism should go hand-in-hand, Thunberg said the growth of the movement against climate change is scaring some powerful political leaders “and that’s why they’re trying to silence us”. 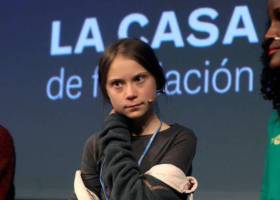 Police estimated the number of marchers in the Climate March through downtown Madrid at 15,000, independent Spanish newspaper accounts put the number at closer to 30,000 and the march’s organizers said as many as 500,000 turned out for the march and subsequent rally.

Thunberg’s participation in the climate march led news media and fans to swarm around her, disrupting the advance of the march and causing her to drop out in order to proceed to the rally, where along with centre stage at the rally with Spanish actor Javier Bardem.

Thunberg is expected to remain in Madrid to push for action against climate change in speeches and meetings throughout the UN Climate Summit, which is scheduled to end on 13th December.

► Read more in English at El País, the BBC and EuroNews …

► Click to read more news about Environment & Sustainability in Spain …