There is no short answer, unfortunately, to the question of who wins and who loses under Spain’s complicated electoral system.

While seemingly altruistic in its design, the end-result of this system is that two kinds of parties are disproportionately rewarded when it comes to gaining seats in Congress: the largest, incumbent parties that can field candidates in all circumscriptions, large and small, and local-regional parties that can focus their entire campaign on one or a handful of circunscripciones. How this happens is a bit more complicated to explain.

First of all, consider that general elections like the one fought Sunday throughout Spain are not decided in a single, nationwide “one-person, one-vote” contest, but actually consist of 52 simultaneous contests in each of the the electoral districts that correspond to Spain’s 50 provinces and the autonomous North African enclave cities of Ceuta and Melilla.

Secondly, unlike the “winner take all” direct proportional representation systems in countries like the United Kingdom or the United States, congressional seats up for grabs in each Spanish circunscripcion are doled out according to a mathematical formula known as the Ley D’Hondt (D’Hondt Method), a party-list proportional representation system that uses a highest averages method for determining how many seats from a given district are awarded to each party.

The upshot is that in small districts such as Soria, a single seat in Congress can be won with just 26,105 votes, while in the Spanish capital city, Madrid, a political party must win 100,595 votes to gain one congressional seat. In other words, a party would need nearly four times as many votes to win two seats in Congress from Madrid than are necessary to win the two seats in Congress assigned to the province of Soria.

Disproportionally benefiting the largest parties and regional-nationalist parties, how did the system manifest itself in Sunday’s national elections?

The surge of the far-right VOX party is indicative, with the party winning 3,640,063 total votes for a 15.09 percent vote share — just 543,000 votes more than the left-wing Unidas Podemos coalition, which won 3,097,185 votes for a vote share that lagged that of VOX by just slightly more than 2 percent. But under the current system VOX was awarded 52 seats, nearly 50 percent more than the 35 awarded to Unidas Podemos.

A starker example, however, is that of the centre-right Ciudadanos party, which competed nationwide to win 1,637,540 votes for a 6.8 percent share of all votes cast in the general election. At the same time, Catalan nationalist Esquerra Republicana de Catalunya (ERC) party won about half as many total votes (869,934) for just 3.61 percent of the national vote.

Under the LOREG system in place, despite Ciudadanos’ national vote total the party disastrously lost 47 congressional in Congress on Sunday, sliding from Spain’s third place to sixth-most represented party in Congress. But, because the ERC competed only in Catalonia’s four electoral districts, including not only Barcelona but also rural areas with many small towns and villages in the Catalan hinterlands, the pro-independence party was awarded three more congressional seats than Ciudadanos, and with 13 seats in Congress is now the fifth-most represented party in Congress. 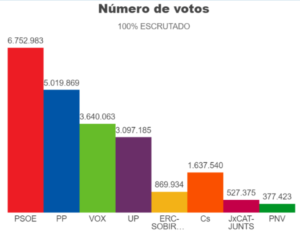 Another example is the new left-wing Mas País party, led by former Podemos co-founder Íñigo Errejón, which ran in 18 districts strategically spread across Spain to win 577,055 votes for 2.4 percent of the national vote and was awarded just three seats in Congress.

Although Catalonia’s pro-independence Junts per Catalunya coalition won fewer votes (527,375) for a lesser total vote share (2.19 percent), it was awarded eight congressional seats — nearly three times as many as Mas País — and will be the seventh-largest party represented in the next Congress.

But, perhaps the most clear-cut example is that of animal-rights party PACMA, which regularly wins a considerable number of votes at the national level in Spain’s general elections, but seems perennially locked out of congressional representation, while smaller regional parties polling far less win seats n Congress.

Once again on Sunday, PACMA did not win a single seat in Congress, despite having won 226,469 votes across Spain for a 0.94 percent share of all votes cast nationwide. But five other parties running only in regional circunscripciones, each of which won far fewer votes nationally than PACMA, were awarded seats in the next session of Congress.

The Coalición Canaria was awarded two seats for its 123,981 votes n the Canary Islands only, Navarra Suma for its 98,448 votes in Navarre, the Bloque Nacionalista Galego got one seat for its 119,597 votes in Galicia, the Partido Regionalista de Cantabria has one seat for just 68,580 votes and the tiny regional ¡Teruel Existe! party gained its first seat in Congress for just 19,696 votes in the province of Teruel.