A voter-preference survey conducted by the GESOP polling organization and published Wednesday outside Spain in neighbouring Andorra shows the Socialist party (PSOE) of Spain’s acting President Pedro Sánchez recovering some voter support, while the ultra-right VOX party continues to gain ground at the expense of the conservative Partido Popular and centre-right Ciudadanos parties.

Conducted from 3rd-5th November and published by the newspaper El Periódic de Andorra, the latest voter survey the GESOP polling firm incorporates the first results since the 4th November televised presidential debate among candidates for the five leading parties in the 10th November general election race.

According to the poll results, the Socialists remain in the lead to become the most-voted party in the elections, edging slightly up since the weekend to net 26.8 percent of the vote total, still down a full 2 percentage points from the vote share won by the PSOE in April’s general elections. The polling firm projects that will net the Socialists anywhere from 116-121 seats in the next Congress, down from the 123 seats it held in the last congressional session. 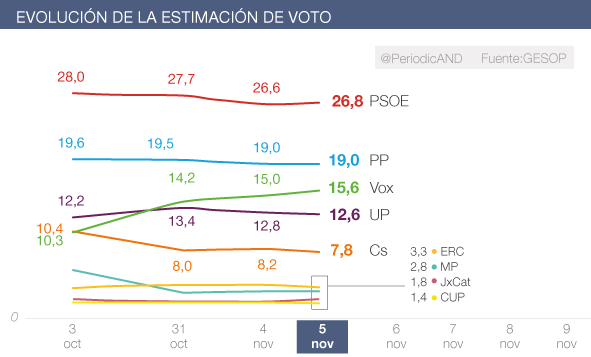 The big story and key to the shift in electoral fortunes in Sunday’s election is the hemorrhaging of voter support for centre-right Ciudadanos party. According to the latest GESOP projection, Ciudadanos will see its vote share fall to 7.8 percent of total votes cast, just half of the 15.86 percent the party won in the April general election.

That would net the party just 12-16 seats, pushing Ciudadanos from its previous third-place ranking into fifth place among parties represented in Congress, with just one quarter of the 57 seats held by the centre-right party in the last session.

The GESOP survey results suggest that it is the bleeding of Ciudadanos voter support to its rivals on the right that is key to the recent rise of both VOX and the PP and has contributed to the stagnation of the PSOE in the polls.

Based on responses from voters surveyed by GESOP pollsters, only 22 percent of voters who cast their ballots for Ciudadanos in the April general election will do so again on Sunday, with 17 percent of Ciudadanos voters shifting their allegiance to the conservative PP and 11 percent abandoning the centre-right party to move even farther to the right with a vote for VOX. Still, an estimated 40 percent of Ciudadanos voters are saying they remain undecided as to how they will cast their ballot Sunday.

VOX has seen its estimated vote share increase by 1 percent in the past week and 5.3 percent over the past month, according to GESOP. The VOX rise has frozen the PP’s ability to grow its share of the total vote, as the conservative party has lost an estimated 20 percent of its voter base to the far-right party.

Even so, the volatile shifts in right-wing voter allegiance this election cycle is what maintains the PP steady at 19 percent vote share, says the GESOP pollsters, with the conservative party compensating for its losses to VOX by attracting an estimated 20 percent of Ciudadanos voters to switch to the PP.

On the political left, the PSOE’s ability to attract centrist voters from Ciudadanos seems to have stalled and it’s slight improvement of 0.2 percent of voter share to net 26.8 percent of total votes Sunday would appear to be linked to Sanchez’s performance in the Monday night televised debate. According to responses to GESOP pollsters, an estimated 27 percent of PSOE voters are still undecided as to how they will cast their votes.

The additional votes the PSOE is attracting in the final days of the campaign appear to be coming from left-wing rival Unidas Podemos, which has also lost vote share to the new entrant Mas País party, as well as to its rivals for vote share in Catalonia, the ERC and the far-left CUP, which has stood candidates for Spain’s national Congress for the first time. 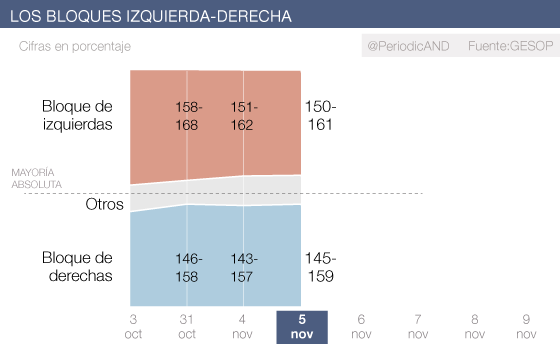 According to the GESOP projections, the PSOE-led progressive-Left bloc of parties is likely to win anywhere from 150-161 seats in Congress, with the PP-led right-wing bloc winning from 145-149 congressional seats.

That result would deny either bloc the prized prized 176 seats in Spain’s 350-member Congress needed to secure an absolute governing majority.

If those projections hold, the end result of Sunday’s balloting will once again translate into negotiations among the parties to secure sufficient support and/or abstentions to secure a simple majority in second-round balloting in Congress to enable formation of a new government.

While the GESOP poll is based on a relatively small sample of 908 interviewees, its margin of error is estimated at an polling industry-acceptable standard of 3.4 percent margin of error, with a 95.5 percent confidence level.

Because Spanish electoral law prohibits the publishing of voter surveys in the week prior to an election, the GESOP daily tracking polls published by El Periódic de Andorra are virtually the last available indicators for the possible final outcome to Sunday’s general election in Spain.