A think-tank report on the link between inequality and social conflict in Spain has warned that increased economic polarization and social conflicts could be in store as a result of the inability of Spain’s economy to generate “stable and sufficient” employment, combined with a “very high” concentration of wealth in relatively few hands and restrictions on social spending that limit more equitable redistribution of benefits among Spaniards.

Published Thursday by the Fundación Alternativas (Alternatives Foundation), a think tank with ties to the Socialist party created in 1997, the organization’s third annual “Report on Inequality in Spain” blames structural economic problems, particularly a preponderance of low-wage employment in Spain, that are serving to shrink Spain’s middle class, put the brakes on social and economic mobility and condemn many families to live in poverty, generation after generation. 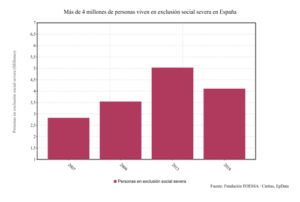 The report comes on the heels of a similar study released by the Caritas-linked FOESSA Foundation that says 4.1 million people living in 1.5 million households across Spain are experiencing social exclusion as a result of extreme poverty.

According to the authors of the Alternativas report, the supposition that a return to growth for Spain’s economy would lead to increased prosperity across the economic spectrum is not born out by economic statistics of the past several years.

“Everything seems to indicate that there are elements of a structural nature that do not substantially reduce the inequality in (economic) growth periods and increase it very rapidly during recessions,” the report’s authors wrote. “If these problems are not addressed, it will be very difficult for income differences among Spanish households to be reduced, even in the context of a return to economic growth and job creation.”

► Click to read more news about Poverty in Spain …